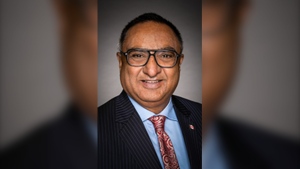 MP for Brampton Centre Ramesh Sangha is now sitting as an Independent after being removed from the Liberal caucus. (Photo courtesy Parliament of Canada)

OTTAWA - Brampton Centre MP Ramesh Sangha has been kicked out of the Liberal caucus for allegedly levelling unsubstantiated accusations against fellow Liberal MPs.

Government whip Mark Holland said in a statement Monday he was made aware late last week that Sangha had made “baseless and dangerous accusations against a number of his caucus colleagues.”

Holland did not specify what those accusations entailed.

But Sangha last week gave a Punjabi-language interview to Y Media, a streaming news channel for the South Asian community in Canada, in which he criticized Liberal MP Navdeep Bains and Defence Minister Harjit Sajjan, both of whom are Sikhs.

In that interview, Sangha suggested Bains and Sajjan are both Khalistani “extremists” who support the creation of an independent Sikh homeland, known as Khalistan, in the Punjab region of India.

“If you state you're an extremist, or a Khalistani, and we have seen this in America, are leaders with extremist ideas fit to be ministers? I have my doubts,” he said.

Sangha suggested Bains may have resigned from Prime Minister Justin Trudeau's cabinet earlier this month because of his extremist views. Bains said he decided to resign because he's not going to seek re-election in order to spend more time with his family.

Sangha did not immediately respond to a request for an interview Monday.

“As we have made clear time and time again, we will not tolerate conspiracy theories, or dangerous and unfounded rhetoric about parliamentarians or other Canadians,” Holland said in his statement Monday, adding that he consulted with Trudeau before taking “the necessary steps” to eject Sangha from the caucus.

“Unfortunately, it is not uncommon for many Canadians to experience suspicions because of their background; we all know where this can lead.

“The Liberal caucus continues to stand firm against racism and intolerance.”

In an interview, Holland declined to specify what Sangha said to merit his removal from caucus.

But he said: “We live in a time where we have a clear understanding today that lies and the spreading of false information has real-life consequences.

“It is utterly unacceptable to do to anybody, to spread false information for the purposes of mischaracterizing who they are ... It is a terrible thing to do to any human being. It is an egregious thing to do to a fellow teammate.”

Sangha, a lawyer first elected as a Liberal MP in 2015, has in the past accused his party of pandering to Sikh separatists.

Just before the 2019 federal election, the National Post reported that Sangha had given a Punjabi-language interview in which he suggested Trudeau's Sikh cabinet ministers are Khalistani separatists.

Indian officials have levelled the same charge, which the Trudeau government has adamantly denied.

Before Trudeau's ill-fated trip to India in 2018, Amarinder Singh, the Punjab state governor, accused Sikh members of Trudeau's cabinet of being separatist extremists and refused to meet Sajjan.

Singh did eventually meet Trudeau and Sajjan during the prime minister's state visit and seemed mollified by Trudeau's assurances that his government is staunchly opposed to Khalistani separatism.

However, the issue flared again when it later emerged that Jaspal Atwal had been invited to two official events with the prime minister during his India trip. Atwal, a Canadian Sikh, had been convicted of attempting to assassinate a Punjab minister during a 1986 visit to British Columbia.

-- With files from Hina Alam