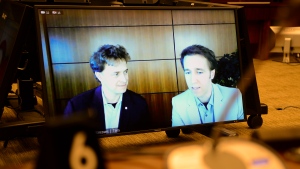 Marc Kielburger, screen left, and Craig Kielburger, screen right, appear as witnesses via videoconference during a House of Commons finance committee in the Wellington Building in Ottawa on Tuesday, July 28, 2020. The committee is looking into Government Spending, WE Charity and the Canada Student Service Grant. THE CANADIAN PRESS/Sean Kilpatrick

OTTAWA - WE Charity co-founders Craig and Marc Kielburger are declining requests to testify before two House of Commons committees.

In a statement, the charity notes that New Democrat MP Charlie Angus has requested that the RCMP and the Canada Revenue Agency investigate WE's operations.

The charity says it would welcome and would co-operate with such investigations but it shouldn't be subject to an investigation by a partisan parliamentary committee at the same time.

Two Commons committees had invited the Kielburger brothers to testify.

Angus requested the RCMP and CRA investigations last week after a former donor, Reed Cowan, alleged that the plaque on a school he had funded in Kenya had been replaced with a plaque in the name of another donor -- which WE said was an unfortunate mistake but which Angus said was proof of a "pattern of duplicitous relations with donors."

Cowan made the allegations during testimony to the Commons ethics committee, which is continuing to scrutinize a now-cancelled federal contract to have WE manage a student services grant program despite the charity's close ties to Prime Minister Justin Trudeau and his family.