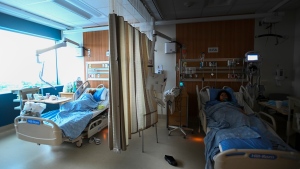 Bushra Wasi, right, and another patient receive oxygen in the respirology unit as they battle COVID-19 at the Humber River Hospital during the COVID-19 pandemic in Toronto on Wednesday, December 9, 2020. THE CANADIAN PRESS/Nathan Denette

Ontario reported 2,998 new COVID-19 cases and 100 new deaths on Friday, including 46 fatalities that occurred earlier in the pandemic but were just confirmed in the London-Middlesex area.

The Ministry of Health says investigations into recent deaths in the Middlesex-London public health unit found an additional 46 people whose deaths were caused by novel coronavirus infection.

They did not say when exactly the deaths occurred, only that they were “earlier in the pandemic.”

The Middlesex-London Public Health Unit said the deaths occurred throughout the length of the pandemic and had merely not been uploaded to the province's data management system.

Of the100 deaths confirmed in the past 24 hours, 45 involved residents of the long-term care system.

Earlier on Friday, federal epidemiologists released modelling that confirms Ontario’s working assumption that deaths during the second wave of the pandemic will likely exceed the first wave.

Active cases across the province declined for a fourth day on Friday, reaching 28,825, down from 30,632 on Monday.

At least 197,194 people have recovered from infection.

Hospitalizations across the province have also stopped rising for several days, falling 10 from yesterday to 1,647.

There are more than 400 patients in intensive care across the province due to COVID-19, with at least 280 of them breathing with the help of a ventilator.

Provincial labs completed 76,472 tests in the past 24 hours, pushing the positivity rate down to 4.6 per cent, the lowest it has been in nearly three weeks.

A further 63,728 specimens remain under investigation.

There are now 243 long-term care homes with outbreaks of COVID-19, involving 1,650 residents with active infections and 1,336 staff.

A total of 17,094 people have completed the two-dose inoculation.

Bushra Wasi, right, and another patient receive oxygen in the respirology unit as they battle COVID-19 at the Humber River Hospital during the COVID-19 pandemic in Toronto on Wednesday, December 9, 2020. THE CANADIAN PRESS/Nathan Denette