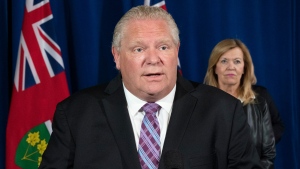 The Ford government will spend $52.5 million to add 3,700 workers at its hospitals and long-term care homes, as the Premier conceded finally on Monday that the province is in a second wave of COVID-19.

"Please consider joining the fight – all it takes is a few good men and women to give us the upper hand and that could make all the difference in the world," Premier Doug Ford said to new nursing and health graduates on Friday, adding that this second wave will be "worse than the first wave we encountered earlier this year."

The new funds will hire up to 1,400 new nurses in provincial hospitals and long-term care homes.

It will also offer 2,000 new personal support worker graduates and others a $5,000 signing bonus if they commit to work in the long-term care system for the next six months.

Long-term care homes have seen more than 1,800 deaths during the pandemic, with many reporting staffing shortages during April and May.

The military was called to assist six badly-hit homes where staffing could not keep up with the spread of infection.

Last week, the government started rolling out its plan to combat the COVID-19 virus during the fall season as daily case counts continue to rise, hitting a record 700 cases on Monday.

Ford first announced that the government has ordered more than five million doses of the flu vaccine, a 16 per cent increase on the 4.4 million doses it ordered last year, as part of its plan to protect the healthcare system from a possible increase in hospitalizations due to a possible second wave of the virus.

Ford then announced that up to 60 pharmacies will offer COVID-19 tests by appointment only as of Sept. 25 with more locations expected to be added in the coming weeks.

Last Friday, Ford announced that his government will be investing more than $283 million to reduce a massive surgery backlog that resulted from the suspension of elective procedures earlier in the COVID-19 pandemic. The government will also be spending an additional $457.5 million on home and community care in an effort to preserve hospital capacity in the advance of a second wave.