Tow truck drivers shot at in 2 separate incidents on Hwy. 401 in Toronto 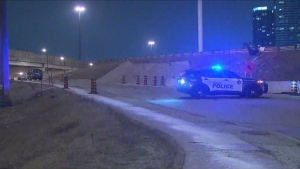 Police were first called to the area of Highway 401 and Avenue Road at around midnight after a tow truck parked on the shoulder of the road was shot at by a passing car. The driver of the truck, police say, was not injured.

The suspect vehicle, according to police, is a dark blue Mercedes, which may be missing its rear licence plate. The vehicle was last seen heading westbound on the 401.

A second shooting was reported a short time later about six kilometres away, near Highway 401 and Leslie Street.

Police say once again the driver of a dark-coloured sedan pulled up and began firing at a tow truck that was pulled over on the side of the road.

Toronto police say officers found several shell cases in the area but no one was injured.

Police have not been able to confirm if the same suspect is responsible for both shootings.

Ontario Provincial Police and the Toronto Police Service are investigating to see if the two incidents are connected.