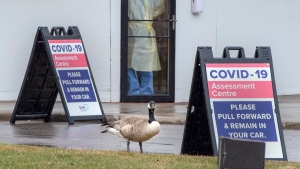 A Canada Goose is the only visitor outside at a Covid-19 testing centre in Toronto on Monday, April 13, 2020. THE CANADIAN PRESS/Frank Gunn

Mayor John Tory says that city officials are discussing additional restrictions that could be put in place to help limit the spread of COVID-19, including a potential expansion of the mask bylaw to cover some workplaces that are currently exempted.

The mask bylaw adopted by city council in July makes face coverings mandatory in all indoor public spaces as well as enclosed common areas in apartment buildings and condominiums but it does not currently apply to workplaces that the public does not have access to.

That means that workers in office buildings and other places of business aren’t necessarily required to wear a mask, though many employers in those settings have set their own policies requiring them.

“In the absence of any additional action being taken (by the province) with regards to masking we are going to see whether there are some things we could do legally at the city level to have an even broader adoption of face coverings, particularly in places like some further aspects of workplaces,” Tory said during an unrelated press conference on Friday. “We are taking a look at these things over the course of the weekend because it has to be very carefully considered in the context of our legal ability to do things and we will have more to say about what we can or cannot do at the start of next week.”

On Thursday the Ford government announced that it would roll back limits on allowable social gatherings in Toronto, Peel Region and Ottawa due to the rise in COVID-19 infections in those communities.

The new limits, however, do not apply to “staffed businesses,” meaning that restaurants, bars and banquet halls can continue to accommodate up to 50 people indoors and 100 outdoors.

On Friday, Tory acknowledged that the city is “limited in what it can do” as a municipality but he said that he does want staff to examine “some other areas that weren’t covered by the provincial orders just to see if there are other places that we can make a difference.”

“Our objective is not to make a political statement; it is simply to make a difference in terms of those very numbers that came out today that are so troubling,” he said, referencing the 130 new COVID-19 infections that were reported in the city earlier on Friday morning.