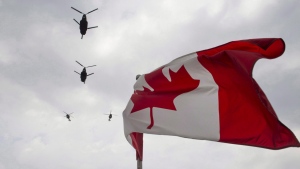 Canadian Forces CH-47 Chinooks participate in a flyover of Parliament Hill in Ottawa on Friday, May 9, 2014. THE CANADIAN PRESS/Justin Tang

OTTAWA - The House of Commons defence committee on Monday ended months of hearings on the Liberal government's handling of sexual misconduct allegations involving senior military commanders without producing a report.

The committee had been investigating the government's handling of complaints against former defence chief Jonathan Vance and his successor Admiral Art McDonald since allegations against the two first emerged in February.

Yet the committee ended its last meeting on Monday without finishing a report on its investigation after Liberal members continued what opposition parties have alleged is a filibuster by speaking for nearly two hours.

The chances of the committee now producing a report appear slim to none as many expect an election to be called in the fall. The move also means two other reports by the committee, including one on access to mental-health services for troops, will not be tabled.

The impasse started last month when the Conservatives sought to call Defence Minister Harjit Sajjan's former chief of staff, Zita Astravas, to testify into what happened after the military ombudsman flagged a complaint against Vance to the minister in March 2018.

Astravas had previously skipped a call from the House of Commons to appear before the committee after the government said ministerial aides would not be allowed to testify.

The filibuster continued even after the Tories tried to drop that request at the end of May.

Liberal member Anita Vandenbeld blamed the opposition during her nearly 30-minute intervention on Monday for letting the debate drag on by trying to limit the parameters for writing the report on military sexual misconduct.

Vandenbeld, who is also Sajjan's parliamentary secretary, also suggested a report would have been finished if the opposition hadn't kept calling witnesses after Liberals and the Bloc Quebecois voted in mid-April to stop the committee's investigation.

“I think we all want to see this report and the other reports,” she said. “Given that we are now at this 11th hour, I think all of us feel a little bit deflated about the fact that we're unlikely to see some of these recommendations, especially the ones that matter to the survivors.”

Conservative defence critic James Bezan, the only non-Liberal to speak on Monday, used his own five-minute intervention at the very end of the meeting to fire back at the Liberals while also lamenting the impact on victims of military sexual misconduct.

“I've never been more disheartened being a member of this committee for the past 10 years,” he said. “It's egregious that Liberal members put more time into protecting the minister of national defence â€¦ than protecting the women or men in uniform.”

Liberal members later released their own set of recommendations that they said were intended to fight sexual misconduct in the military.

Retired colonel Michel Drapeau, who is now a lawyer specializing in military affairs and who testified before the committee, described the committee's failure to produce a report and recommendations as a “major embarrassment.”

The defence committee was actually one of two committees looking into military sexual misconduct. The committee on the status of women had been investigating the broader issue and produced a report last week containing recommendations to address the problem.

While he praised the recommendations released last week by the status of women committee, Drapeau suggested the defence committee - and Liberals in particular - were turning their backs on women in uniform.

“Truth be told, the Liberals led by (Vandenbeld) come across as obstructionists,” he said in an email. “In a smart-ass manner, they act as an impediment to putting into place a mechanism to bring about necessary cultural and statutory changes to the military sexual culture.”

Megan MacKenzie, who studies military sexual misconduct at Simon Fraser University in B.C., was similarly upset, saying in an email: “It's so baffling that the prime minister continues to defend the minister on this.

“I would hope more pressure could be shifted directly to the prime minister on this issue at this point. He's meant to be a feminist prime minister with a feminist mandate and he's essentially been using the committee process to silence information about sexual assault. It's not okay.”

But Maya Eichler, an expert on military sexual misconduct at Mount Saint Vincent University in Halifax who also testified, said unlike the committee on the status of women, the defence committee's study was rife with partisan politics from the very beginning.

“The focus of course became the minister, and that political focus was too strong for there to be any collective interest in doing something meaningful for the impacted military members and for long-term military culture change,” she said.

“In my opinion, (the defence committee) miserably failed (military sexual trauma) survivors, military members and the Canadian public by refusing to work together across party political lines on this pressing issue.”

Global News first reported allegations in February that Vance had a relationship with a subordinate that began in 2001 and continued after he accepted the top job in 2015. Vance has also been accused of sending a lewd email to a junior member in 2012.

Vance, who stepped down in January, has declined requests for comment from The Canadian Press, but Global has reported he denies any wrongdoing. McDonald, who temporarily stepped aside as defence chief after a month in the job, has not commented.

Both are currently under military police investigation.

This report by The Canadian Press was first published June 21, 2021.