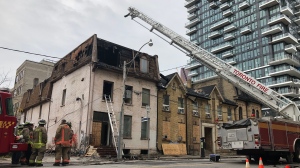 Firefighters are pictured at the scene of a three-storey house fire at Jarvis and Shuter streets on Nov. 2, 2019. (Corey Baird)

A Toronto firefighter who was injured on the job has been released from the Intensive Care Unit.

“I am very pleased to announce that Toronto Fire Service Captain James Warren has been released from the Intensive Care Unit at St Michael’s Hospital and will continue to recover from his injuries in hospital before completing his recovery at home,” Toronto Fire Chief Matthew Pegg said in a statement Monday evening.

Warren and another firefighter were seriously injured while battling an overnight blaze at a three-storey home at Jarvis and Shuter streets on Nov. 2.

The two were in the process of ventilating the building to make sure that no one was inside and were attempting to move onto a ledge on the third floor when they fell to the ground.

Warren was rushed to a trauma centre in critical condition, while the other firefighter suffered a broken leg.

“On behalf of Toronto Fire Services, I want to thank all of those who were instrumental in this outcome, especially our Firefighters who initially assisted Captain Warren, the Toronto Paramedics who assessed, treated and transported Captain Warren to hospital and the exceptional staff at St. Michaels Hospital,” Pegg said.

The fire is being investigated as a case of arson and police have released a composite sketch of a suspect in the case.

Anyone with information about the incident is being asked to contact police.