Notes from the campaign trail: Fallout continues for Liberals over blackface photos 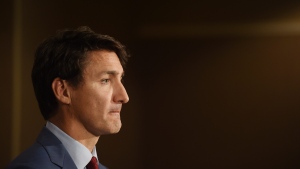 Liberal Leader Justin Trudeau makes a policy announcement promising to ban all military-style assault rifles as part of a broader gun-control plan that will also take steps towards restricting and banning handguns in Toronto on Friday, Sept. 20, 2019. THE CANADIAN PRESS/Sean Kilpatrick

Do you want to get the first snapshot on how Canadians are reacting to the photos and video of Liberal leader Justin Trudeau in blackface? Check back for the results of the tracking polls on Sunday.

A tracking poll usually uses a three-night sample. That means every night it drops the responses from four nights ago only using the last three nights to calculate any trend. So Sunday morning’s results will have the responses from Thursday, Friday and Saturday nights – all after the Trudeau blackface revelation. Two pollsters, Nik Nanos for CTV News and Mainstreet are doing tracking that is made public.

The Liberals and Conservatives have the money to do their own sophisticated polling. Their polling is not made public but does sometimes get leaked or used by the parties to help spin journalists. Party polling during election campaigns is usually targeted at specific ridings or regions and not national in scope. For example the parties would be more interested to see if the blackface photo reveal is having an impact in Brampton or in specific ridings they think are up for grabs on October 21. Parties might also use focus groups to test any messaging lines responding to the racism issue raised over the past couple of days.

Parties carefully track the feedback they are getting from their door-to-door campaigning. Party headquarters count on candidates and their volunteer canvassers to relay key takeaways from their door step chats with voters. One experienced back room politico told me that feedback will pick up any impact of the Trudeau photos and video more quickly than the polls.

On Friday, Andrew Scheer repeated his line on Trudeau and the blackface images. He said, “I believe Canadians … might have been able to accept his apology had he been more open and transparent the first time, if he hadn't lied when he was first given the opportunity to address it.” The Conservative leader was in Saint. John, N.B., to promise more money to replace aging MRI and CT scan machines.

Jagmeet Singh took the NDP campaign to southwestern Ontario. Singh too was asked again about the impact of the Trudeau photos. Today Singh drew a line between Trudeau’s decision to apply blackface years ago and Liberal policies today.

Singh recalled Trudeau’s “mocking” response to an indigenous activist in March. Protesting the quality of water on reserves, the woman was escorted out of the event as Trudeau said, “Thank you for your donation.” Singh said it showed that Trudeau feels “it is OK to mock people for their struggles they face.” Singh went on to call Trudeau’s actions “deeply troubling.” In his comments Singh continues to focus on the impact on Canadians concerned with how racialized people are treated.

In Toronto, Justin Trudeau went to the riding of Toronto-Danforth, where a deadly mass shooting took place last summer, to make gun control policy announcement. For the second day he spent considerable time connecting with voters, shaking hands and chatting as he campaigned with the local Liberal candidate, Julie Dabrusin. At his news conference Trudeau said he would be reaching out to Jagmeet Singh directly. Trudeau explained the blackface video is from his student days working for a rafting company. Reports are swirling that there are more photos of Trudeau. His response today was, “I have nothing to confirm on that.” Again today Trudeau apologized for his actions, saying, “I deeply hurt racialized Canadians and I am deeply sorry for that.”

The parties will spend much of the weekend gauging the impact of the first big moment of the 2019 election. The consensus right now is the advantage is with the NDP and Jagmeet Singh. The challenge for the NDP is to capitalize on it. Friday afternoon there was Singh back in front of the cameras saying he will only have a private conversation with Justin Trudeau. Singh said he is not interested in being part of any effort by the Liberals that might help them manage the fallout from the publication of the blackface photos.