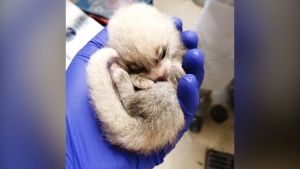 One of the red panda cubs born at the Toronto Zoo last week has died. (Toronto Zoo)

One of the two newborn red panda cubs at the Toronto Zoo has passed away after she was taken to the ICU for emergency treatment.

The zoo reported the birth of two babies last week, saying that a two-year-old red panda named Ila gave birth to two healthy cubs. It was the first time a red panda has been pregnant at the zoo in 24 years.

On Wednesday, just over a week later, the zoo reported that one of the two female cubs was found weak on Sunday and was given treatment.

“One of the two female cubs was found weak on Sunday and had been transferred to the ICU … where she received treatment and was fed every three hours by the veterinary team,” the zoo said in statement on Wednesday.

The zoo said that after her condition seemed to have improved, she was returned to her mom at the Red Panda House, where her condition was continuously monitoring.

We are saddened to announce that one of the red panda cubs, born Tuesday, July 14th, has passed away: https://t.co/FbpI8FdCSJ pic.twitter.com/XDPpsijM4l

“Both cubs were receiving supplemental feedings every three hours, and Ila continued to care for them,” the zoo said.

“Shortly after being placed back with mom, the same cub appeared cold, dehydrated, and lethargic, at which point our team began additional treatment and she was placed back in an incubator. Sadly, this cub passed away overnight.”

The zoo said it suspects that the mother of the cub was not producing enough milk to feed both cubs.

“Our team will continue feeding the remaining cub while still keeping her with Ila to allow them to continue bonding,” the zoo said.

“Being the first red panda cubs born at the zoo since 1996, it is with heavy hearts that our team mourns this significant loss and we appreciate our community’s support as we continue to care for and monitor the remaining cub.”

Red pandas are an endangered species native to southwestern China and the eastern Himalayas. Experts estimate that there are between 2,500 and 10,000 of the animals in the wild.