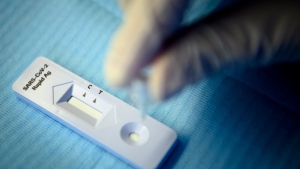 Ontario is preparing to send a pack of five rapid antigen COVID-19 tests home with every school child in the province in time for winter break, in a massive effort to screen kids over the holidays and prevent infected kids from re-entering schools in January.

Ontario health officials said that sometime in mid-December, schools will hand out 11 million rapid antigen COVID-19 tests – enough for all the roughly 2.2 million public school students in the province – with instructions that they use one every three or four days over the winter break, starting on Dec. 23.

Anyone who tests positive with the antigen tests will then be required to take a confirmatory PCR COVID-19 test.

But participation is voluntary and any child who does not take the rapid tests will be allowed to return to school in January.

“It is really premised at getting them back to school safely in January,” Education Minister Stephen Lecce said of the plan.

The move is a major sea change from official Ford government policy this school year.

In September, CP24 revealed private schools in the province were receiving rapid antigen tests, free of charge, while public schools went without. The government responded by closing what it called "a loophole" that allowed private schools access to the tests.

The Ministry of Health later told the two agencies that supplied the test kits that provincial rules prohibited them from distributing tests to parents and community groups and they should stop.

Increasing pressure led them to launch a limited rapid antigen testing program for schools in October, with local public health units deciding to use the tests just a handful of times in the GTA.

During that time, Chief Medical Officer of Health Dr. Kieran Moore said repeatedly there was no need for mass asymptomatic testing as it would potentially bring back many errant results.

Today, Moore said the landscape has changed and as more people head indoors and attend holiday events, he expects to see higher case counts and the rapid tests will provide an additional layer of protection that wasn't needed in the fall.

“The major risk that we had is going to into the winter months – we had 711 cases today and we’re anticipating our rates going up, and as rates go up the sensitivity to the test will be very good and the number of false positives will be less,” Moore said.

Calling the next few weeks “Winter socialization season,” he said he thought it was appropriate “prudent and reasonable to have those tests in the hands of families in order to better protect them.”

Ontario NDP education critic Marit Stiles said given the history of the Ford government’s actions on rapid tests for children, she did not trust they would deliver.

“I have no confidence this government will be able to roll out these tests by the holidays,” she said.

“Now they’re coming around to rapid testing in schools, after they took them out of parents hands back in September.”

Rapid antigen tests are less sensitive than PCR tests but cost only a fraction of PCR and take as little as 15 minutes to complete.

Officials said the province had to go out and procure additional tests from BTNX of Markham, Ont. in addition to the federal stockpile which has supplied them with nearly 28 million rapid tests to date, in order to get rapid tests to all students by mid-December.

They added that 100 First Nations schools in the province will also be offered packs of rapid tests, but said they were not sure if all schools would take them up on the offer.

Now, in conjunction with a new “test to stay” program for asymptomatic kids at schools experiencing COVID-19 outbreaks and the mass distribution of rapid antigen tests for the winter break, the province is also going to set up dozens of asymptomatic testing sites in major public spaces in what they called a “Holiday Mobile Testing Blitz.”

Up to 43 testing teams will be sent to malls, public squares and holiday markets, sometimes in conjunction with mobile COVID-19 vaccine clinics.

The mobile testing sites will be focused on areas of high COVID-19 transmission and lower vaccination rates.