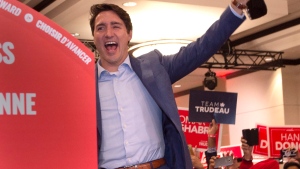 Liberal Leader Justin Trudeau wears a protective vest under his shirt as he arrives at a rally in Mississauga, Ont., Saturday, Oct. 12, 2019. The Rally was delayed for 90 minutes due to a security issue. THE CANADIAN PRESS/Frank Gunn

Liberal officials would not reveal the nature of the threat, which resulted in a 90-minute delay before the incumbent prime minister appeared before the roughly 2,000 party supporters who had turned out to a convention near Pearson airport as the election campaign enters its final week.

The armoured vest was not readily apparent as Trudeau delivered a 25-minute speech, in which the Liberal leader lashed out at the Conservatives for promising cuts to government spending before urging progressive voters against casting their ballots for the NDP.

But sources later confirmed to The Canadian Press that Trudeau, took wore a suit jacket during the rally rather than his usual rolled-up sleeves and loosened tie, was wearing a vest, which was noticeable in photos taken at the event.

Trudeau's extra security detail was obvious as the Liberal leader was escorted through the boisterous crowd by a large number of plainclothes RCMP officers as well as Mounties dressed in green tactical gear.

The police officers made a point of standing on the stage surveying the crowd while Trudeau spoke and remained close by his side after his speech as the Liberal leader shook hands with members of the crowd before leaving the room.

Prepared remarks had indicated that Trudeau's wife, Sophie Gregoire Trudeau, was to introduce the Liberal leader. She did not appear or take the stage during the rally.

The Peel Regional Police referred questions to the RCMP.

“For security reasons, we do not comment on security measures given to the prime minister,” RCMP spokeswoman Stephanie Dumoulin said in email.

“Any threat made against â†•JustinTrudeau, or any leader, is troubling to all of us,” he wrote. “No matter how you vote or believe, no one should face threats of violence. To the officers who protect all of us - thank you.”

Liberals had been hoping Saturday's rally would see Trudeau make a mark in the vote-rich Toronto-area, where the party needs to have a strong showing to have any hope of again forming government.

Prior to Trudeau's appearance, both Foreign Affairs Minister Chrystia Freeland and Economic Development Minister Navdeep Bains addressed the crowd, some of whose members began to express impatience over the Liberal leader's unexplained delay taking the microphone.

And while the crowd cheered Trudeau's remarks, the delay and later news of a security threat threatened to cast a pall over the event and detract from the Liberal leader's warnings about the potential threat of a Conservative government under Andrew Scheer.

The Liberals will hope to get back on track Sunday when Trudeau campaigns in the Toronto area as the federal election campaign heads into its final week with the Liberals and Conservatives running neck and neck with the New Democrats and Bloc Quebecois also picking up some steam.

This report by The Canadian Press was first published on Oct. 12, 2019.

-With files from Joanna Smith in Toronto

Liberal Leader Justin Trudeau wears a protective vest under his shirt as he arrives at a rally in Mississauga, Ont., Saturday, Oct. 12, 2019. The Rally was delayed for 90 minutes due to a security issue. THE CANADIAN PRESS/Frank Gunn