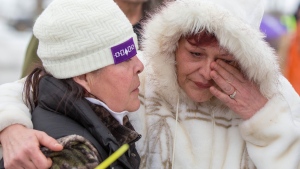 VIA Rail says it has been forced to cancel all trips between Montreal and Toronto and Toronto and Ottawa for at least another two days due to an ongoing protest that began last week.

Protesters have set up a blockade on a CN Rail line near Belleville in support of the Wet’suwet’en First Nation’s hereditary chiefs and their supporters in northern B.C., who are opposing the Coastal GasLink pipeline.

The demonstration, VIA says, has forced the company to cancel all trains between Toronto and Ottawa, Toronto and Montreal, as well as Toronto and Kingston.

The company said late Tuesday night that no trains would run along the affected routes Wednesday or Thursday because of uncertainty around the blockade.

At least 157 trains have been cancelled and at least 24,500 passengers have been impacted, VIA confirmed in a written statement sent out earlier Tuesday.

VIA Rail spokesperson Marie-Anna Murat said the company is emailing travellers with updates as the situation evolves.

“We know that this unfortunate situation has an impact on our passengers travelling plans and we apologize for the inconvenience it is causing,” her statement read.

“We encourage them, if they need to travel in the next few days, to use an alternative mode of transportation since we do not have the capability of providing one.”

VIA says reservations can be cancelled for a full refund with no service charges up to two days prior to the departure date.

“Since the infrastructure VIA Rail operates on belongs to CN, we invite you to communicate with them regarding information on any progress regarding the resolution of the blockade,” Murat’s statement concluded.

CN says it has been granted an injunction order to remove protesters from the site but there has been no change since it was served.

Ontario Provincial Police say they are aware of the injunction but directed all questions to "CN or the courts."

"The situation remains the same at the CN Rail line near Wyman’s Road in Tyendinaga Township. The OPP is monitoring the situation and members of the OPP Provincial Liaison Team is maintaining a dialogue with participants," the OPP said in a statement issued Tuesday.

"We cannot speculate on next steps. We continue to work toward a peaceful and safe resolution."

In an update on Tuesday, CN announced that it would be forced to "imminently" shut down "significant parts" of its Canadian network if blockades around the country are not removed.

"The blockades near Belleville, Ont., on CN’s only eastern link between Western Canada and Eastern Canada and between Eastern Canada and the U.S. Mid-West and on CN’s northern mainline in B.C. between Prince George and Prince Rupert, are impacting all Canadians’ ability to move goods and enable trade," CN said in a statement.

"There are currently no movements of any trains, freight or passenger, at both those locations. Hundreds of trains have been canceled since the blockades began five days ago. The impact is also being felt beyond Canada’s borders and is harming the country’s reputation as a stable and viable supply chain partner."