'No forgetting': Leafs look to move forward after another playoff disappointment 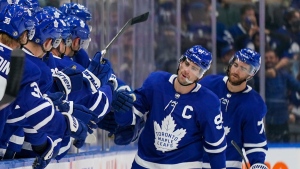 The Maple Leafs thought they had addressed the problem.

Coming off a disappointing 2020 post-season inside the NHL bubble where the team stumbled in the qualifying round, Toronto identified some areas that desperately needed improvement as it looked to pick up the pieces.

And it all seemed to be coming together as the Leafs churned towards the playoffs in 2021's pandemic-necessitated North Division. Toronto finished atop the standings, sat 18 points ahead of the Montreal Canadiens heading into the Original Six rivals' first-round matchup, and build a 3-1 series lead.

The Leafs blew their advantage, falling in overtime in Games 5 and 6, before faceplanting in the winner-take-all finale on home ice.

A franchise that still hasn't won a playoff round since 2004 - or the Stanley Cup since 1967 - was once again left searching for answers as it took another long gaze into the mirror.

Segments of a furious fan base called for change, with much of the vitriol being directed at star winger Mitch Marner's inability to deliver in crunch time.

But despite the agonizing result, the Leafs felt a lot went right in a trying season played under COVID-19's long shadow.

Heading into 2021-21, the message from top to bottom is simple - stay the course and continue to build.

“We're looking to raise the standard because clearly we've got to get to another level.”

If that doesn't happen, Keefe and his bosses - general manager Kyle Dubas and team president Brendan Shanahan - could find themselves in the crosshairs.

“We can look back and learn from it,” Dubas said of past failures. “But we only control what we do today and everyday moving forward. I don't think we can hide from it and run from it. We have to do everything we can as an organization to be ready for when those moments come again.

“I have full faith in everybody in that room.”

Dubas decided to stick with his high-priced core of forwards - Marner, Auston Matthews, John Tavares and William Nylander - rather than make an off-season move he said would have provided change to placate the angry masses, but also made the roster worse.

“Nothing I can do now,” Marner, a regular-season wizard, said of his playoff disappearing act. “The past is the past.”

Matthews was one of the players to escape criticism after putting up 41 goals in 52 games with a bum wrist in the pandemic-shortened season before continuing with strong showings in the playoffs.

But that didn't lessen the blow.

“There's nothing that we can really change,” he said as Toronto returns to the ultra-competitive Atlantic Division with Boston, Tampa Bay, Florida and Montreal. “We've got to put our best foot forward.”

Keefe said the aim for his team, which underwent off-season change with the departures of Zach Hyman, Frederik Andersen, Joe Thornton and Zach Bogosian, isn't to ignore what's come before.

The goal is to use it as fuel.

“There's no forgetting,” he said. “There's learning and moving forward. But we can't lose sight of the fact that we did do a number of great things last season. We're not here to change our foundation. The key for us here is the things that we do - especially offensively - we need them to hold up not just in the regular season, but in the post-season.

“When it counts the most.”

Matthews registered those 41 goals with that wrist injury that eventually required surgery. Stretched over an 82-game season, the 24-year-old was on pace to find the back of the net 65 times. That might be a stretch for the upcoming campaign, but there's no doubt Matthews will be eyeing 50 and beyond.

Toronto's power play was dominant early last season - sitting first in the league on March 10 - but operated at paltry 6.9 per cent the rest of the schedule despite all that firepower up front. The Leafs then went 3 for 23 in the playoffs against Montreal, including an 0-for-7 performance in Games 5 through 7 when one goal could have made the difference. Assistant coach Manny Malhotra is no longer in charge of the power play, with the newly hired Spencer Carbery now calling the shots. One early change is Marner and his creativity now occupying the so-called “bumper spot” at the top of the slot. “Mitch has created his own position, which is nice,” defenceman Morgan Rielly said with a grin.

Jack Campbell had a breakout campaign in 2020-21, setting an NHL record with 11 straight wins to start a season. But with Andersen moving on and the 29-year-old having never shouldered the full load as an NHL starter, the Leafs signed Petr Mrazek to share the duties. The Czech netminder, who's also 29, has started 278 regular-season and playoff games, while Campbell heads into the season with 85 career starts.

Hyman's contract status was a topic of conversation last season before he signed with the Edmonton Oilers in unrestricted free agency this summer. Heading into the final year of his contract and eligible to become a UFA in July, Rielly has made it clear he doesn't plan on talking about negotiations in 2021-22. “I think you all know how I feel about being a Leaf,” he said. “But there is a business aspect to it.”

The Leafs play their first game against a U.S. team since March 10, 2020, when the New York Rangers visit Scotiabank Arena on Oct. 18. Toronto's first-ever game against the expansion Seattle Kraken goes Dec. 19 after the team completes it's traditional swing through Western Canada.