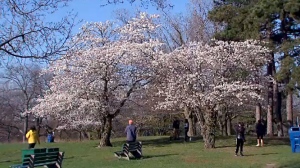 Mayor John Tory says that he is considering closing High Park completely to keep crowds from forming during the cherry blossom season.

Large crowds typically show up at the west-end park once the dozens of cherry blossom tress planted in the vicinity of Grenadier Park begin to bloom in late April or early May but given the global COVID-19 pandemic and the extreme measures the city has went to in order to enforce physical distancing, there are increasing concerns around whether it is feasible for people to safely see the blossoms at all this spring.

“It is a big concern for us. I really hate to say this but we are going to have a plan and it may well involve just closing the park for that period of time,” Tory told CP24 during a Skype interview from his home on Sunday. “I have talked about the difficulty in practical terms in closing parks. Big parks like High Park, what are you going to do put yellow tape around the entire park? But I think what we have talked about is closing vehicle access to the park entirely so that people can’t take their cars in cause a lot of people who come to see the cherry blossoms come from elsewhere in the city. It is a shame but it is just one of those things where health has to come first.”

The city has previously closed all amenities within its roughly 1,500 parks, but the green spaces themselves remain open for now. .

Last week Tory enacted a bylaw that prohibits people from being within two metres of one another at parks and public squares with an exception for those who are in the same household.

Given that the number of people heading to High Park for the cherry blossoms usually numbers in the hundreds at any one time, Tory said that there is just no way around the fact that it will have to be “severely limited” for people this year.

“I had suggested maybe we find a television channel. Maybe CP24 can just be turned over to being the cherry blossom channel with continuous footage of blossoming trees because they are very beautiful and people love to go look at them,” he said. “But this year it is going to be different like a lot of things. Like pride, like the jazz festival, like Luminato. These things are going to be very different and may not happen in the way people like and I am sorry about that. But saving lives comes first, keeping people healthy comes first and getting this over with comes first.”

At least one prominent website and Twitter account that typically informs the public on the progress of the buds at high park and releases forecasts on when they will be in full bloom has already suspended that practice given the threat posed by COVID-19.