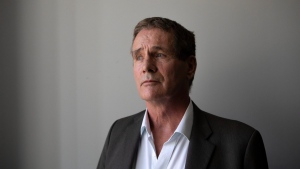 David Milgaard, who spent 23 years in prison after being wrongfully convicted of murder, is photographed after a press conference held by Innocence Canada in Toronto on October 9, 2019. THE CANADIAN PRESS/Chris Young

David Milgaard, the victim of one of Canada's most notorious miscarriages of justice, has died in an Alberta hospital after a short illness. He was 69.

James Lockyer, a Toronto-based lawyer who worked closely on the case and helped found the advocacy organization Innocence Canada, confirmed the death after speaking with Milgaard's sister on Sunday.

His loss is “devastating for the family,” Lockyer told The Canadian Press.

Milgaard was only 16 when he was charged and wrongfully convicted in the rape and murder of Saskatoon nursing aide Gail Miller, who was stabbed and left to die in the snow in the early morning of Jan. 31, 1969.

He would spend 23 years in prison until his release in 1992.

“I think it's important for everybody, not just lawyers, but for the public itself to be aware that wrongful convictions are taking place and that these people are sitting right now, behind bars and they're trying to get out,” he said in 2015.

“The policies that are keeping them there need to be changed. The wrongful conviction review process is failing all of us miserably.”

Lockyer said he and Milgaard met with Justice Minister David Lametti just over two years ago in Ottawa to push for the creation of an independent body to review claims of wrongful convictions.

“I think David's legacy now is to follow through with that, call it the Milgaard legislation and let's get it passed, let's get that independent tribunal. We still don't have it, but maybe this will put the spur into the Department of Justice to get on with it,” he said in an interview on Sunday.

The establishment of an independent criminal case review commission “to make it easier and faster for potentially wrongfully convicted people to have their applications reviewed” is listed as the top priority in Prime Minister Justin Trudeau's mandate letter for Lametti in December 2019. The objective is repeated in his mandate letter following the federal election last fall.

Lockyer said it's up to Lametti to “get moving” on creating the commission.

During their meeting in 2020, Lockyer said the minister asked Milgaard to sign a copy of the Tragically Hip album featuring the song “Wheat Kings,” which was inspired by his case.

Lametti posted a statement on Twitter Sunday, saying Milgaard was a tireless advocate for the wrongfully convicted who wanted to see the system change.

“I am deeply saddened to know that he will not live to see this happen,” Lametti wrote.

The minister added that he would keep his signed copy of the Tragically Hip's album “Fully Completely” as a memory of Milgaard.

Milgaard and two friends had been passing through Saskatoon on a road trip when Miller was killed.

A year later, he was convicted of murder and sentenced to life in prison.

One of the youngest inmates, the 17-year-old was raped and attempted suicide. He was also shot by police during an attempted prison break.

“It was a nightmare,” Milgaard said in 2014. “People do not have much love and care inside those walls.”

Milgaard was released in 1992 after his mother, who fought relentlessly to clear her son's name, pushed to get the case heard by the Supreme Court of Canada. The high court threw out Milgaard's conviction and he was finally exonerated in 1997 after DNA tests proved that semen found at the crime scene didn't match his.

A man named Larry Fisher was convicted in 1999 of first-degree murder in Miller's death and sentenced to life in prison, where he died in 2015.

Lockyer said Milgaard's late mother, Joyce, was “a hero in her own right.”

Peter Edwards, a Toronto Star journalist who helped Joyce Milgaard write a memoir about her fight to see her son exonerated, recalled a moment that he said sticks out in his mind - when Milgaard visited the paper's newsroom not long after he was released from prison in order to thank Edwards.

It was a rainy day, he said, and Milgaard wasn't wearing a shirt because he wanted to feel the rain against his skin after missing it for so many years.

The Saskatchewan government issued Milgaard a formal apology and awarded him a $10-million compensation package.

The province also spent $11.2 million on a public inquiry into Milgaard's wrongful conviction. The final report was released in 2008 with 13 recommendations to reform prosecution and policing in Canada. Among them was a suggestion that the federal government establish an independent review commission to examine claims of wrongful conviction.

Ron Dalton, co-president of Innocence Canada, said Milgaard could have “turned inward and been very soured on life, but he didn't let that happen.”

He could have walked away from his advocacy after clearing his name, but he “chose to look over his shoulder at the people left behind, the people who were going through suffering,” said Dalton, who was wrongfully convicted and later exonerated in his wife's death more than 30 years ago.

Milgaard leaves behind two teenaged children, he said in an interview.

Lockyer said he had visited Milgaard at his home in Calgary about six weeks ago and “he was his usual happy self,” talking about the need for an independent commission and current claims of wrongful conviction in Canada.

When he heard about Milgaard's death on Sunday, Lockyer said he was just leaving a prison in British Columbia, where he had been visiting with a woman whose wrongful conviction claim Milgaard had referred to him.

“I'm going to carry on doing what David wanted me to do, so there's a legacy too.”