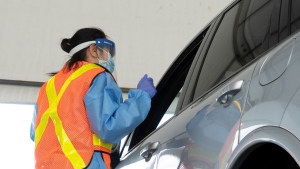 Ottawa Health personnel speaks with the driver before administering a COVID-19 test at a drive-through test centre in Ottawa, Friday, September 4, 2020. THE CANADIAN PRESS/Adrian Wyld

Ontario is reporting more than 500 new COVID-19 cases today as the provincewide positivity rate declines to its lowest level in a month.

Provincial health officials reported 577 new COVID-19 cases today, down from 600 on Monday but up slightly from 564 last week.

With 21,133 tests processed over the past 24 hours, Ontario is reporting a positivity rate of 2.3 per cent, down from 3.4 per cent one week ago. It is the lowest positivity rate reported since Aug. 13.

The Ontario Science Advisory Table now estimates that the province’s reproductive number is 0.98, suggesting that transmission could be on the wane after months of exponential growth.

Of the cases reported today, 452 cases, or 78 per cent, are in individuals who are not fully vaccinated or have an unknown vaccination status and 125, or 22 per cent, are in those who are fully immunized.

Only about 31 per cent of Ontarians are not fully immunized, including all children under the age of 12, who are not yet eligible to receive a COVID-19 vaccine.

Last week, students in Ontario returned to the classroom for the first time in months and so far nearly 300 active infections have been detected in schools across the province.

Seven more virus-related deaths were reported in the province today, including one death that occurred more than a month ago, officials say. Over the past seven days, 71 deaths have been added to Ontario's overall COVID-19 death toll, although the province says some of those fatalities are more than a month old.

At least 192 patients with COVID-19 are receiving treatment in the ICU at Ontario hospitals, unchanged from last Tuesday. According to the Ministry of Health, 183 of those patients are not fully vaccinated or have an unknown vaccination status and nine are fully vaccinated.

The number of patients on ventilators at Ontario hospitals now stands at 119, up from 113 one week ago.

"When we take a step back and look at the data from a bigger picture standpoint and we actually look at data from multiple countries, the people who are fully vaccinated who end up very sick tend to be on the older end of the spectrum," infectious diseases specialist Dr. Isaac Bogoch told CP24 on Tuesday.

"Mostly over the age of 70 and in fact when you look at the over 80 bracket, it is actually significantly overrepresented, and of course people with underlying medical conditions, including immunosuppression."

Ottawa Health personnel speaks with the driver before administering a COVID-19 test at a drive-through test centre in Ottawa, Friday, September 4, 2020. THE CANADIAN PRESS/Adrian Wyld