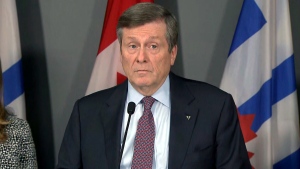 Mayor John Tory says that he has already begun work on securing billions of dollars in government funding to allow the TTC to follow through on an ambitious capital plan that calls for the purchase of hundreds of new subway trains, buses and streetcars.

Tory made the comment to reporters on Thursday morning, one day after the TTC released its plan for the use of $4.56 billion in additional funding that will be comings its way over the coming the next decade as a result of an increase to the city building levy.

Under the plan about $3.09 billion would be directed to cover the city’s one-third share of various subway state of good repair initiatives, including the installation of an automatic train control system on Line 2.

The remainder of the money, meanwhile, would go towards replacing some of the TTC’s vehicles that are nearing or at the end of their lifespan.

That includes $458 million to replace the 62 subway trains on Line 2 and another $165 million to purchase 18 additional trains to accommodate the growing ridership on Line 1.

Speaking with reporters, Tory said that the plan represents “the most significant investment in upgrading the transit system in the history of the city” and will hopefully give him a leg up as he pushes government leaders for additional funding to carry it out.

“We have taken the first step. It is something the city has rarely done in the past to step up and say our money is there, we can tell you exactly where it is coming from and now over to you,” he said. “My job is to get that (additional) money. I have been proven to be fairly successful at that so far and I am going to work relentlessly to get it done.”

The report says that the additional buses would allow the TTC to avoid “what would have otherwise been a significant impact to bus service” but it points out that there is still a need for nearly 1,000 additional buses, which remain unfunded. That shortfall, the report notes, will likely leave the TTC unable to maintain current service levels over the next decade.

As for the new streetcars, the report says that they will be needed by 2026 given expected ridership growth, meaning that they will have to be ordered relatively soon.

“These purchases are essential. They are not nice to have things, they are essential,” Tory said. ”I think in the past what people did is they gave you half of a report and kind of said we need this many (new vehicles) in the very short term and this is as much as we can afford. The approach we have taken is to lay it all out what we need and it’s pretty straightforward mathematics saying if you have all these people coming to the city and you have these subway extensions being built that means you need more trains and unless you want to start switching off streetcars to buses we need to order more streetcars.”

Tory said that he won’t advocate for ordering the new vehicles without securing promises of funding from other levels of government.

He said that he is, however, confident that the other governments will eventually come to the table.

“We are trying to do this the responsible way as quickly as possible,” he said.