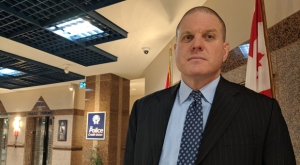 Insp. Hank Idsinga said he still gets emotional when he thinks about being in the morgue the day investigators cracked open a collection of large planters and discovered the remains of several men who would later be identified as victims of alleged serial killer Bruce McArthur.

But Idsinga, a 29-year veteran of the Toronto Police Service and the new head of the homicide unit, believes that good detectives have to be able to take an unflinching look at even the most gruesome evidence.

“I have always been and will always be that guy who is down on his haunches with my notebook open right beside the body taking that really close look at it, where nobody else wants to go anywhere near that body,” he explained in a year-end interview with CP24.com.

"I just seem to be able to put everything else aside and recognize what needs to get done."

He recalled a particularly unpleasant scene 25 years ago when he was a constable at 14 Division.

“I was at a sudden death scene and we had this decomposing body in a rooming house in a very small room and even the coroner wouldn’t go in,” he said.

“The coroner stood by the door and I said, ‘OK, I’ll go in. What do you want me to do?’ I snap on some gloves and the coroner stood 10 feet back with a mask on his face.”

Idsinga, who grew up in a community west of Toronto, joined the city’s police service in 1989 and was working as a uniformed officer at 14 Division when he came upon his first murder scene in the spring of 1990.

“It was a little bit chaotic,” he said. “The detective-sergeant from homicide shows up and gets everyone under control and gets everyone focused on what they have to do and what needs to be accomplished there. And I said at that point in time, that’s what I want to do.”

He spent a decade working in various investigative roles at 14 Division before he moved to the homicide unit.

“In late 2004 one of my investigations overlapped with a homicide investigation being run by Ken Taylor and Mark Saunders and that is when I first met Mark and Ken. I made a positive impression on them and they recruited me,” he said. “I was just in my glory.”

In 2005, he began his career at the homicide unit, where he was the partner of now-Police Chief Mark Saunders.

Idsinga was promoted to Detective-Sergeant in 2011 and took over as acting inspector of the homicide unit earlier this year.

When asked how he is adapting to his new role, Idsinga admitted that it has been a bit of an adjustment.

“I have a lot of administrative work that I’m responsible for. I like to keep up on all the ongoing investigations … so it is a lot to keep up on all of that, to monitor the hours that everyone is putting in at the office and all the budgets,” he said.

“It is completely different than what I have done for the last 13.5 years. It’s definitely challenging.”

His new position also means he will have a less active role in the McArthur investigation, a case he spent countless hours working on over the past year.

He noted although he was the major case manager, there was a “huge team of people” working on the investigation.

“While I became the face of it, it certainly wasn’t a Hank Idsinga investigation. It was a Toronto Police Service investigation and it was a team-focused investigation,” he said.

“At any particular time, you can pluck people in or insert people into that investigation and it won’t skip a beat.”

Idsinga added that the same will be true for the investigators involved in the unsolved December 2017 murders of billionaires Barry and Honey Sherman.

The lead detective Susan Gomes has been promoted to inspector and will soon be moving to a new unit.

The police service has faced considerable criticism over its handling of both the Sherman and McArthur investigations.

Investigators in the Sherman case were challenged by the family over how evidence was collected and what conclusions were made. Police ruled the case a double homicide six weeks after the bodies were found. Reports initially suggested that investigators were operating under the theory that the case was a murder-suicide. The Sherman family even hired a team of private investigators and lawyers to lay out what they said were flaws in the case.

In the McArthur case, police were accused of not taking the public seriously enough when there were concerns that a number of missing men may have been targeted by a serial killer.

"We had missing persons and in December 2017 had any one of those missing persons come walking through that door at headquarters and said, 'Hey, here I am. I wanted to disappear for a few years but I just wanted to let you know.' Would it have surprised me? Ya. But it wouldn’t have shocked me."

Idsinga said while the relationship between police and members of the media can be tenuous at times, it is important that investigators maintain a positive rapport with journalists.

“I’m very thankful for the media and utilize the media and always have utilized the media to get the message out,” he said, noting that on a couple of occasions he has been “gunnysacked."

The homicide unit has been the focus of much media attention over the past year.

The unit has seen 96 homicides so far in 2018, which includes two mass casualty attacks: the Yonge Street van attack and the Danforth shooting.

Idsinga conceded that all of these investigations have undoubtedly placed a strain on the detectives.

“I remember walking around our office towards the end of August there… you could really physically see people were exhausted and people were drained,” he said.

“If each officer is responsible for six to seven murders a year, that is a comfortable pace… Right now I’ve got some officers who are responsible for 10, 12, 14 cases in 2018.”

In addition to the heavy caseloads, Idsigna’s unit is now tasked with managing a new missing persons unit and a video analysis team.

Despite all of this, he said the unit has a solid solve rate this year.

Given his workload, Idsinga said he doesn’t see all the vacation days he’s earned going to good use.

“I’ve served long enough where I get seven weeks of vacation a year and I haven’t been able to take those seven weeks of vacation over the last several years. Suddenly getting the promotion provides me with… additional days that I can take as a senior officer and you think technically I’m going to have a lot more time off but I don’t see that happening,” he said with a laugh.

“To use up all the time that I’ve accumulated, I’d literally be taking a week off every month and I just can’t afford to do that in this role.”

He did, however, manage to squeeze in a vacation to Europe this summer with his wife and 16-year-old daughter.

“It wasn’t much of a vacation,” the 51-year-old joked. “I think we saw 16 cities and 14 days so they were exhausted when we got back. We got back on the Sunday night relatively late and I was back to work on the Monday morning.”

Although the stress involved with being a homicide detective is evident, Idsinga said he can think of few other careers he would have chosen.

“I literally have memories from being eight years old and wanting to be a detective. I dabbled a little bit with the thought of becoming a pilot. But once I grew too tall for that, I lost that,” said Idsinga, who stands nearly six-foot-six.

“I dabbled in computer science in high school and then upon coming to the realization that I would be bored out of my mind programming computers, I grew out of that. But other than that, I’ve never really pictured doing anything else.”