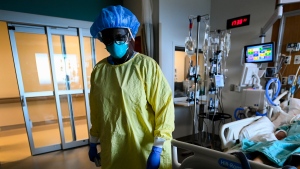 Premier Doug Ford says that his government will not make vaccination mandatory for hospital workers amid concerns about staffing shortages in the sector.

Ford made the announcement in a statement issued on Wednesday afternoon, effectively going against the advice of a number of experts, including members of the province’s own science table who had touted the mandate as an “evidence-based policy that protects Ontarians.”

“This is a complex issue. But when the impact of the potential departure of tens of thousands of health-care workers is weighed against the small number of outbreaks that are currently active in Ontario’s hospitals, I am not prepared to jeopardize the delivery of care to millions of Ontarians,” Ford said in the statement. “Having looked at the evidence, our government has decided to maintain its flexible approach by leaving human resourcing decisions up to individual hospitals.”

The Ontario Hospital Association, along with all three opposition parties at Queen’s Park, have been calling on the Ford government to implement a mandatory vaccination policy for hospital workers since July.

In October the OHA even submitted a petition in favour of a mandate that was signed by administrators at 120 of Ontario's 141 hospitals.

The premier, however, has resisted taking the step and has often cited the experience of Quebec which on Wednesday abruptly amended its vaccine mandate so that it only applies to new employees due to concerns about the loss of thousands of unvaccinated health-care workers.

“What I would say is that from the beginning the health and well being of all Ontarians has been our priority and it continues to be, so its the patients that we are protecting by having the (unvaccinated) employees tested frequently for COVID but also the thousands of patients who have been waiting for well over a year to have procedures done that are painful and debilitating. Hips and knee replacements, cataract surgeries and other surgeries,” Health Minister Christine Elliott told reporters at Queen’s Park on Wednesday afternoon. “While it's terrible to lose someone to COVID it is also terrible to lose someone from something that hasn't been diagnosed or hasn’t been operated on.”

Wednesday’s announcement comes two weeks after Ford wrote dozens of stakeholders, including every hospital CEO in Ontario, to solicit their input on the policy and ask them a number of pointed questions about the impact that potential staffing shortages could have on their operations.

The OHA has said that the vast majority of its member hospitals support a vaccine mandate but Elliott said on Wednesday that there were “some individual hospitals that indicated that they were very concerned about loss of health human resources,” though she refused to identify those institutions.

Speaking with CP24 following Ford’s announcement, the scientific director of the science table Dr. Peter Juni said that he believes the staffing concerns raised by the premier would be “surmountable.”

“I think the strongest case for vaccine mandates we really have is in hospitals, long-term care homes and retirement homes because the staff there is looking after vulnerable populations, So from our perspective it would have been indicative to have a provincewide mandate,” he said. “As a patient, especially if I'm vulnerable, I would like to have the guarantee that I'm seeing people in the hospital or in a practice who are fully vaccinated.”

"This is a bad decision. This is the wrong decision. Health-care workers should be vaccinated. End of story," Warner said. "When you're in the public service caring for the most vulnerable people, it's your duty to be vaccinated."

He said the decision shows that Ford is not listening to the medical community who've been advocating for a provincewide vaccine mandate.

"I think most people would want to be cared for by someone who's vaccinated. And as the leader of the province, it's his responsibility to set the tone, not just within the healthcare, but within the entire scope of what we're doing here that vaccines are important. And they are a way towards more freedom and more normalcy and a healthier population," Warner added.

Doris Grinspun, the chief executive officer of the Registered Nurses' Association of Ontario, said she is upset with the decision and called the premier's claim that tens of thousands of workers will quit if a mandate is implemented "fantasyland."

"And that is the premier's way of catering quite frankly, to the few anti-vaxxers within any of the professions," Grinspun said.

She believes the premier's decision is political rather than scientific.

"I'm hugely disappointed because for once, I thought the premier is governing for everybody. But today, he made clear for whom he is governing."

In his statement Ford seemed to suggest that the spread of COVID-19 in hospital is not a significant driver of case counts, given that there are only six outbreaks in hospital settings as of today.

He said that Ontario can always take additional action "if warranted" in the future.

But that promise is not sitting well with opposition leaders.

“We know that this premier sought advice and the experts made it clear that no unvaccinated person should be working in health-care settings with the most vulnerable folks amongst us,” NDP Leader Andrea Horwath told reporters at Queen’s Park. “That's what the advice was. So to have the minister decide that it's going to be OK for people who work in in hospitals, for people who are visiting in hospitals and for hospital patients to have risk of contracting COVID-19 because the staff aren’t vaccinated is a problem.”

"Doug Ford has chosen anti-vaxxers over cancer patients," Liberal Leader Steven Del Deuca added in a tweet. "He’s putting our most vulnerable patients in harm’s way because he’s scared that the Conservative anti-vax community won’t support his re-election otherwise. He should be ashamed."

Ontario's current policy allows unvaccinated health-care workers to continue to attend work so long as they participate in a rapid testing program for COVID-19.

Some individual hospitals have implemented more stringent policies, though.

Last month the Hospital for Sick Children announced that it was putting 147 employees on unpaid leave for not complying with their vaccine mandate. The University Health Network also indicated that it planned to terminate about one per cent of its workforce for failing to comply with a similar policy.