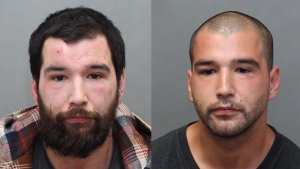 Dallas Richards is wanted for attempted murder in a stabbing in Mount Dennis last month. (Handout)

Police are searching for a 32-year-old man wanted in connection with a stabbing in Mount Dennis last month that left another man with serious injuries.

Emergency crews were called to an apartment building near Weston Road and Jane Street before 4 a.m. on July 23.

Police say two men were arguing when it turned physical, resulting in one of them being assaulted by the other with a weapon.

When officers arrived, they located a victim in the hallway suffering from a laceration to his neck.

He was rushed to a hospital with non-life-threatening injuries.

On Wednesday, police have identified the suspect as Dallas Richards, of no fixed address.

Richards is wanted for attempted murder and two counts of failing to comply with probation.

He is described as five-foot-six, 160 lbs., with a small build, brown hair, brown eyes, and a full beard. He has a tattoo on his left forearm of a scroll with words.