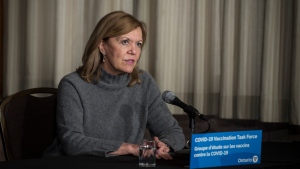 Christine Elliott, Deputy Premier and Minister of Health, responds to a question during a press conference regarding COVID-19 vaccine distribution, at Queen's Park in Toronto on Friday, December 11, 2020. THE CANADIAN PRESS/ Tijana Martin

The Ford government is open to implementing some additional measures for paid sick leave for workers, Ontario Heath Minister Christine Elliott suggested Tuesday, after months of calls for such measures by virtually the entire public health infrastructure in the province.

Elliott told reporters after Question Period on Tuesday that given the Trudeau Liberals did not make any material changes to the Canada Recovery and Sickness Benefit (CRSB) in the budget tabled on Monday, they would have to do something more.

“It didn’t seem necessary for us to institute another program if there already was a federal program that could have been improved,” Elliott said. “However it was clear yesterday with the budget that it was not going to be improved by the federal government, so we are considering our alternatives now to deal with those gaps.”

The CRSB provides $500 per week for four weeks for workers ordered to isolate due to COVID-19 infection or identification as a close contact in outbreak investigation.

But critics have repeatedly slammed it for not providing enough money, and requiring workers to begin going without their pay while they apply for access to it.

The lack of paid sick leave has been identified by nearly all public health officials, doctors and many mayors in the province as a significant issue, as the current regime encourages workers to go to work sick in order to preserve their paycheque.

In response, Ontario Premier Doug Ford, multiple finance ministers and other PC MPPs have said paid sick leave, given the option of the CRSB, was not necessary.

Elliott’s response appeared to deviate from the course charted by Labour Minister Monte McNaughton earlier in the day, who said any improvement to paid sick leave in the province would have to come from improvements to the federal CSRB.

Prior to the 2021 Ontario budget tabling, bureaucrats told CP24 they had not been ordered to explore or even come up with a price tag for any sick leave measure.

The Ford government eliminated Ontario’s paid sick leave provisions in one of its first acts after taking office in 2018.

The Ontario COVID-19 Science Advisory Table published a report Tuesday that said easily accessible sick leave was one of its six “pathways” out of the coronavirus pandemic.

“An emergency benefit that offers more money, is easily accessible, immediately paid and that, for the duration of the pandemic, is available to essential workers –when they are sick, when they’ve been exposed, need time off to get tested, or when it’s their turn to get vaccinated – will help limit spread.”

Christine Elliott, Deputy Premier and Minister of Health, responds to a question during a press conference regarding COVID-19 vaccine distribution, at Queen's Park in Toronto on Friday, December 11, 2020. THE CANADIAN PRESS/ Tijana Martin